In 1948, a group of women formed a service group called the Carthage Junior League. The Junior Service League wanted to improve the quality of life in their community by providing a library. Starting in 1958, these thirteen dedicated women raised over $10,000 through tireless effort and fundraisers and were finally able to purchase and open the Service League Library on a permanent basis in 1963.

The original Carthage telephone office was purchased by the Carthage Service League from the Chamber of Commerce at a price of $1,000, and in 1961 was moved onto the lot where it still stands today.  The original building covered 1,200 square feet and housed 4,000 books. After two additions and many improvements, the library grew to almost 12,000 square feet and housed over 49,000 titles.  Most of that growth is attributed to the many generous donations from within the community. The most noteworthy contributor was the late Sammy Matthews Brown, a local businesswoman who generously gave both her time and money to make our library the success it is today. In 1991, before the death of Mrs. Brown in 1996, the members of the Carthage Service League unanimously agreed to rename the library in her honor.

The library relocated in June 2013 into a renovated National Guard Armory on South Market St.  The building had been sitting vacant for a number of years when Panola County Commissioners approved the renovation to house a new library.  This increased the library space to 14,000 square feet with additional space for meeting rooms and staff offices.

The cost of operating the library has increased over the years to the point where Panola County and the City of Carthage provide the majority of the funding needed to operate on a daily basis.

Need help or have a question? We are here to help!
Contact Us Now 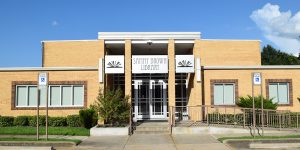 Didn’t find what you are looking for?